Amaka looked at the envelope that contained the little money she had left until her parents sent her another. That of course won’t happen any time before next month. “What do I do now?” She asked herself aloud. She had to have that red gown, she already told the owner of the boutique she would come for it that evening.

The issue was that Amaka had gone with her new friends to that expensive boutique to shop for Valentine’s Day. Her friends had picked clothes of all kinds and she didn’t want to look out of place. One of the girls had asked her if she wasn’t going to pick anything. Out of shame she had gone for the red dress. After she was told what it cost, it was too late. Amaka didn’t know how to tell the girls she couldn’t afford it. All eyes had been on her. She simply told the first lie that came to mind. “Oh, of course I’ll have this. It’s just that I left my ATM card back at the hostel.”

One of the girls had suggested she go get it. Amaka assured the lady she’d return with the money that evening.

“Hello, what’s up,” Lillian, her roommate greeted as she entered the room. “What’s with the sober reflection?”

“Oh, hi Lillian, nothing o, I was just getting ready to go to class.”

“Oh, okay, but you really do look worried Amaka, are you sure there’s no problem?” Lillian asked again, kicking off her shoes.

“There is no problem at all.” Amaka lied again.

Amaka sat down there for a while, wondering if she should tell Lillian about her predicament. The problem with telling Lillian stuff like these was that her roommate always made her feel bad afterwards.

“Er, Lillian, can I ask you for a little favour?”

“Ahaa,” Lillian rasped and sat up in bed. “I knew it; I knew there was something eating at you. Spit it out already.”

“Well, I was wondering if you could loan me some money.”

“Okay, like how much are we talking about?” Lillian asked.

“Er, You know my parents are yet to send me money and I need to pay for Mr Donald’s text books.” Amaka lied.

“Amaka, Mr Donald’s text book is only 3k what do need 12k for?”  Lillian asked again.

“Well are you giving me the money or not, you don’t have to interrogate me.” Amaka blurted out.

“I am not interrogating you and I am certainly not going to give 12k without knowing what you need it for.”  Lillian fired back.

Amaka was quiet. Lillian shrugged and laid back on her bed

“Oh Okay, I’ll tell you.” Amaka finally said, and went to sit beside Lillian on her bed. “There’s this party coming up on Valentine’s Day and everyone is going. I need to be there too.”

“Oh, no, no, actually, the gate fee is 2k but that’s not a problem, Shelby’s brother is taking us, he‘ll sort that out.”

“So what’s the 12k for then?” Lillian asked again.

“There’s this red gown I need to pay for this evening. That’s what I need the money for.”

Lillian shook her head in disbelief. “Let me get this right. You want to buy a red gown, one red gown for a whopping sum of 12,000 for a valentine party?”

“Er, something like that.” Amaka said in a tiny voice.

“Amaka, I swear I don’t recognize you these days. You are not the girl I met and liked in first year. Since you became friends with those wild girls, you’ve changed completely. I mean, you don’t seem to remember who you are anymore.”

“Hey, hey, I just asked for a loan and not a sermon please.” Amara said angrily.

“Giving you the money is not the problem, the fact that you think spending 12k on a dress you’d wear for just one night is so important, is where the problem lies.” Lillian pointed out.

“So, you’ll give me the money?” Amaka asked hopefully.

“I don’t have up to that amount to give to you, but I will give you what I can.”  Lillian said and got up to get the money from her wardrobe.

“Here,” Lillian said handing the money over to her. “That is 6k, it’s all I can give to you and I want it back as soon as your next pocket money arrives okay.”

“Certainly ma’am, and thank you again.”Amaka was beaming.

“You are welcome.” Lillian said lying on her bed. “So, this guy taking you girls, do you trust him?”

“Shelby’s boyfriend? I thought you said he was her brother?”

“Eh, that’s what Shelby wants us to believe but we know better.”

“I will be thanks.” Amaka replied.  “What about you Lillian, any date for valentine?”

“Me? No o, I’m not cut out for that this year. If you ask me, the valentine stuff is greatly overrated. Besides, people get taken advantage of this period. I’ll just sleep the night away here in this room.”

“Wow, you strong o, I wish I could say that. But there’s no way on this earth that I will roast in this room on Valentine’s Day.” Amaka declared.

“Just be safe though.”

Amaka smiled and rushed out to go get the red gown. Afterwards, she let all her friends know that she had picked it up.

As the week unfolded, valentine was all everyone talked about. The students could barely wait for Thursday. Every student clearly had a plan for the weekend; the few who didn’t were pitied and considered ‘roasters’.

Amaka’s great and only plan was to have super fun at that party. She planned to hook up with a rich dude who’d hopefully buy her the most current BB phone around.

The long awaited day finally arrived. Amaka prepared with care. Her red gown fitted her so well. She looked very pretty and she knew it. After applying her makeup, she turned to Lillian.

“Beautiful, very gorgeous in fact,” Lillian said and meant it. “Red is good on you.”

“Oh thank you so much.” Amaka beamed, looking down at herself. “Do you think my cleavage is obvious enough?”

“It’ll be too obvious, if you keep tugging at it.” Lillian warned.

“Whatever.” Amaka laughed. “I’m off, see you in the morning and don’t wait up for me.”  “Oh, I didn’t plan to.” Lillian laughed. “Just make sure you have your key with you.”

On arrival at the party, Amaka immediately noticed two things; The place was rowdy and everyone seemed to have a cigarette in hand; boys and girls alike.

“So much smoking in here.” She whispered to her friends.

“What did you expect?” One of the girls asked her.

Shelby’s date offered her a stick of cigarette which she refused. “I don’t smoke.” She snapped, shocked that he would think otherwise. Shelby laughed and brought out a pack from her purse. Amaka’s eyes popped out wider from their sockets.

“Breaking news.” Shelby said and moved on to the dance floor with boyfriend.

Amaka followed the other girls to a table and sat down with them. As the night progressed, she began to wonder if Lillian had been was right all along. She didn’t fit into this crowd in any way.

Just when Amaka’s tummy was beginning to make embarrassing noises, trays of food began to arrive at their table. She waited expectantly for a plate to be placed in front of her but that didn’t happen.

“Sorry, here, you pay for whatever you eat or drink.” One of the girls told her.

Amaka was mortified. She looked from one girl to the other. But none of them paid her any attention. Now her stomach was making real loud noises. Shelby soon returned to an adjoining table with her boyfriend. Amaka watched them order all sorts of food and drinks but no one offered her anything. She felt stupid as she sat down there in her red gown feeling hungry and sorry for herself. All because I wanted to catch a rich dude she thought.

There and then she analyzed the people she had called her friends. All they’d ever contributed to her life was make her want to be like them. Lillian was right. Since she began to roll with these idiots she called her friends, she had spent way more money than her parents ever sent her. That too was something she never did before. “Excuse me.”’ she said to the girl next to her and left the party. Thank God she had 300 on her. It was around 1.00am but she didn’t care. She’d rather risk trekking all the way back to the hostel than spend another second with those vipers.

Luckily for, she found a cab, and the driver agreed to take her to school for that price. Amaka hopped into the cab without arguments.

Amaka was so angry that she forgot she had her own key. She banged on the door hard and loud until Lillian opened up.

“What the heck….” Lillian began to say.

“Abeg, abeg, abeg, hold it there.” Amaka hissed and moved past her into the room.

Lillian looked outside to be sure Amaka was alone before she locked the door.

Amaka kicked off her shoes angrily. “Abeg, help unzip this dress for me.”

Lillian said nothing. She did as she was told and waited.

“Is there any food here, please?”

“Yeah, there’s a little rice and beans in the pot but there’s no meat in it,” Lillian replied. Amaka pulled out the pot, grabbed at the nearest spoon and began to eat hungrily. Who cared about meat, she thought. This was the first meal she was having the whole evening. “Thank you so much Lillian, you are truly a life saver.” Amaka finally said.

“I have a bottle of fanta in the fridge, you want it?”

“Yes, yes please, God bless you.” Amaka said and meant it from the bottom of her heart.  “You are a true friend and I should have listened to you.” she added.

Amaka gave her roommate a full account of her experience that night. “Well, aren’t you going to say I told you so?” She asked when Lillian said nothing.

“Thank God you got here safely Amaka, that’s what is important. I mean, its 1am, anything could have happened to you”.

“I know, chai, I was so angry and humiliated that I had to leave.” Amaka said and burst into tears. “I feel so stupid and used by those idiots that don’t even know anything in class.”

“Well, you are wise now, that’s all that is important.” Lillian consoled.

Editor’s Addendum: Happy Valentine’s day; Valentine’s Day is about LOVE, and what are the characteristics of love? A few: Love is patient, kind, not jealous nor arrogant, nor selfish, is self-controlled and not easily offended…let this Valentine’s Day truly be about LOVE. 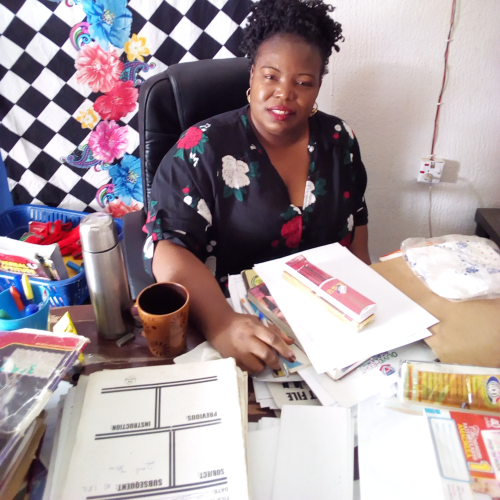