nging competition has drawn to a close, with its grand finale which held on the 30th of September 2012. 15 contestants from West Africa battled for close to 10 weeks in the gruelling Project Fame Academy.

The judges were Bibie Brew, Tee-y Mix, and Ade Bantu. The hosts were the dashing Joseph Benjamin and the delectable Adora Oleh. The Finalists were Christian, Ayo, Adetoun, Oyinkansade, Musulyn, Ella and Marvellous. 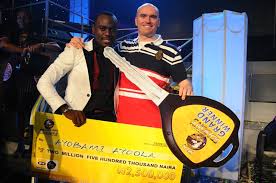 However, despite of stiff opposition, Ayobami Ayoola beat the other 6 to win the coveted prize of N2.5 million and a spanking new ride. Marvellous Odiete was the first runner up with a prize of N1.5 million and a car. Adetoun Adekoya and Ella were 2nd and 3rd runners up respectively and went home with N1 million in prize money.

Congratulations to all the contestants; they are all winners! What are you doing with that amazing voice God blessed you with?
www.projectfamewestafrica.com

Jennifer Nkem-Eneanyahttp://jennyuncensored.wordpress.com
5 Things You Didn't Know About Jennifer in 2015: 1. Her newest collection of short stories, 'The Curious Case of the Small Pikin & Other Stories' is available on okadabooks.com 2. She ported from Blogger to WordPress and shares her uncensored thoughts on jennyuncensored.wordpress.com 3. She is an aspiring Filmmaker & Talk-show Host[ess] 4. She's a mother of two, wife of one and daughter of God. 5. She plans to travel around the world in less than 80 days... Now you Know! Find me on Twitter: @jennynkem